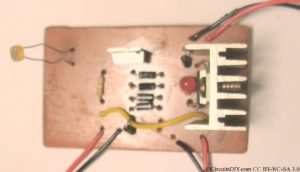 Today we discuss about a simple solar LED circuit. We know that solar panels comes from 12Volt 3watt to larger sizes. So, for storing energy, we need a 12Volt battery. As we don’t want ‘jhamela’, we prefer SLA SMF batteries.

12Volt SMF batteries comes around 650-700 rupees, while 6Volt SMF batteries comes in 150-200 rupees, commonly known as charger battery. These have 4AH rating at 6Volt. That’s of the source and storage, now we think about the output. Yes, we will be using a LED of high leumens of course. 1Watt or 3Watt LED requires 3.5-4Volt forward voltage to glow at full intensity. We also need to provide a way that the circuit senses light and turns on the LED whenever there is darkness(night).

So, finally we have to make a circuit which does the following,

This below circuit does above all steps in a simple manner of voltage regulation. If we have used voltage conversion technology, it would be more efficient but that would increase circuit’s complexity and cost. So, the circuit diagram below. 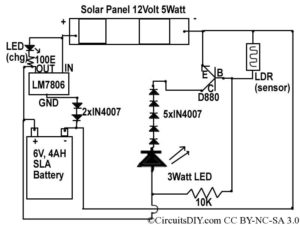 In the diagram, we can see 12Volt supply from solar panel(5Watt) is regulated by LM7806 I/C to charge 6Volt battery. Since 6Volt batteries charge at 7.2-7.5Volt, we added two forward biased IN4007 diode to  reference level, so that the pair makes a zener breakdown at 1.2Volts, making the output at 7.2Volts. That voltage charges battery at maximum 5/12=400ma(appx) which is a good current level, as it is exactly C/10 of that of battery. So, this will never overcharge the battery.

Now we come to LED driving unit. Here, we use same logic of forward biased diode to reduce voltage. The battery voltage of 6Volt SMF battery is around 6.4-6.6Volts. Here we attach 5 forward biased IN4007 diode to reduce  voltage by appx 3Volt, so the LED is fed with around 3.5Volts. If we require more brightness, we will short any one of the diodes to increase the voltage by 0.6Volt. The driver transistor here used is D880, we have used it in many circuits, as it is a easily available NPN transistor with high current ratings. We bias the base through a 10K resistor from the +6V rail, and reverse bias it through a LDR to GND. Thus, when there is light on LDR, the transistor will be unsaturated, and vice versa. The total parts expense in this circuit is 30-35 rupees. We can also make a PCB instead of making it on vero. 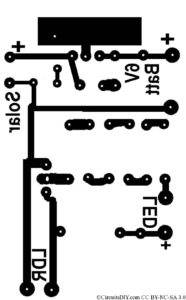